Can Letting Your Kids Always Win Do More Harm Then Good?

We’ve all grown up playing many different games as kids, and eventually you grow to learn that sometimes you win and sometimes you lose. I’m sure you remember when you were a kid you played games with your parents, and every time you won you felt as though you were on top of the world and invincible. As a parent though sometimes you cant help yourself from letting

your child win. Letting them win is worth seeing their face light up brightly and them giddily clap their hands and squeal in delight. After all as parents you live to see your children smile and be happy. Be cautious however. When it comes to playing games and letting children win it is extremely important to remember that sometimes letting your child win constantly can be detrimental to their overall success.

So one might wonder, how can letting my child win be so bad especially when it makes them so happy? Laura Doth from New Mexico, a mom of three, says that she's never been one to let her kids win and says, "Losing gives you the opportunity and the motivation to improve your skills and get better. Then, when you do win, the satisfaction is real"  The first thing to keep in mind is that in life you’re not always going to win. Its ultimately those losses and set backs are what make you a stronger, and better person. If you’re always letting your child win at something they most likely will not get any better at what they’re playing, or even worse they will not know how to respond to defeat or loss. While you might let your child win at home, if your child grows increasingly attached to winning they almost seem to begin to expect to win. This can translate into a big no no and a huge problem when it comes time to play games with other people or kids their age, who wont let them win. It can turn into a tantrum or ultimately tarnish their sportsmanship conduct and desire to want to play games.

I interviewed one of our teachers at Math Genie, Ms. Niralee and she told me about one of her personal stories, the times she spent playing chess with her dad growing up. As a child one of her favorite traditions on Sunday morning was to play chess with her father. She recalls back to when she was around seven when these weekly game sessions began. Every weekend she would play with her father and he remembered that he wouldn’t let her win. Whenever they played he would not let her win, instead he would let her make her move and then he would explain to her why that move was problematic or the wrong move to make but then he would not let her change her move. This ultimately made her a better player and taught her the value of winning when she was good enough to beat him. Niralee describes that moment as “One of the best days of my life when I was finally able to beat my father, that gratification and happiness I felt is unparalleled. Each loss motivated me to return with an oomph to redeem myself from that defeat”.

Winning cannot become a habit. It is something that must be earned. Yes sometimes when you see a child repeatedly losing and them becoming increasingly discouraged you can let them win or give them positive reinforcement to guide them in the right direction and keep that enthusiasm but you would be surprised to see how children respond to losing. Every loss becomes a lesson. There’s always room for progress. Math Genie incorporates fun math and reading games into its classes that truly invoke that desire for winning but teaches children to accept loss gracefully. 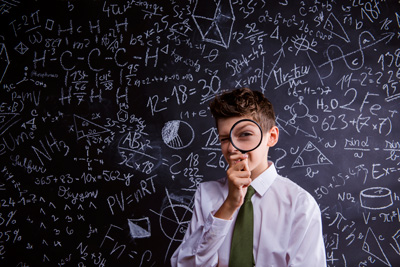