Newark Student with Speech Issues Jumps a Grade Thanks to Mental Math!

Jaisen, now 7 years old, got an IEP when he was 2 years old. He could not speak, couldn’t remember and could not articulate very well. His mom Ja 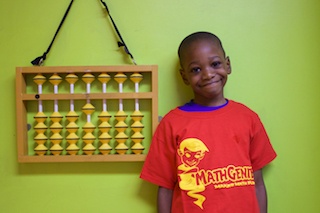 vita heard about Math Genie and enrolled him at the South Plainfield center in 2013 when he was 4. It was a 40 minute drive one way for a 1 hour class.

Jaisen went from not being able speak to speaking in complete sentences, remembering and focusing better, and became exceptionally better at mental math. He received admission to North Star, Newark’s top charter school. Where he also skipped Kindergarten and went straight to First Grade.

Javita credits Math Genie for this achievement and his overall improvement in math and language arts. His confidence has grown tremendously.

Javita Turner spoke to Mohit S. Jain, Co-Founder of Math Genie, about Jaisen’s progress. It has been lightly edited for readability.

Mohit: Ok, so what made you come to Math Genie? What were you looking for?

Javita: “I was looking to help Jaisen Fraser-Davis learn. He wasn’t learning the way I was teaching him, which was just communicating and counting and remembering. I looked up how to help children mentally and your website popped up. It said “mental math.” I thought, what can happen with the mental math? Apparently it reroutes the brain, strengthens the brain muscles, and teaches the child to focus. I said ok you know what let me give it a try. The price was great, it was only $100 a month and I can afford that, so I gave it a try. I saw what Tejal, his teacher, was able to do with him within just half a year. He went from not speaking to speaking in complete sentences, to remembering all the number, and to remembering how to do work on the abacus even when it wasn’t on front of him. I was really impressed. From there after he learned just a little bit of the mentals and he remembered all his sounds just with me reinforcing it. He remembered sight words and it helped him focus and remember.”

Mohit: “So would you credit mental math with helping him with sight words and language?”

Javita: “Completely, it was all you. Math Genie did everything.”

Mohit: “So you come from quite far. How long does it take you to get to Math Genie?

Javita: “Yes I do and it is a fifty minute drive.”

Mohit: “What other improvements have you seen in him?”

Javita: “He had an IEP at 2 years old because he wasn’t able to speak, couldn’t remember, and he couldn’t articulate very well. Now he attends one of the top charter schools in Newark and skipped kindergarten and went right to first grade.”

Mohit: “So he missed his cutoff?’

Javita: “Yes, because of the cut off he had to do pre-k again, but at North Star they tested at grade level, in reading, writing, math, so he was fine and able to skip kindergarten.”

Mohit: “How do you see him different from other students?”

Javita: “He’s definitely a stronger math student. He has more confidence. At Math Genie, he thinks he can do anything. I’ll put a trigonometry problem up and he’ll try it. He has no fear of math, no fear of reading, no fear of anything when it comes to school.”

Mohit: “Wow that is awesome. His mentals are pretty awesome. You’ve seen his mentals?”

Javita: “Yes he doesn’t need the abacus anymore. He could do it by himself. He can look at the number and move it with his eyes.”

Mohit: “So you have other kids too, right? How do you compare him because obviously they didn’t come here.”

Javita: I have three other ones, but Jaisen is far advanced in spelling and math. He can spell well because he can see the word and remember it. He can spell even big words; even in kindergarten and first grade he could spell exceptionally well.”

Mohit: “So spelling is basically pattern recognition. If I ask you to spell a word, you’re not spelling it letter by letter. It’s just you look at it, the pattern is in your head and you get it. So visualization gets you better pattern visualization.”

Mohit: “How much time do you spend with homework?

Javita: “Not a lot, unfortunately. Maybe on Friday we do the homework, but I’m always asking him mental math. If I have a $20 bill and I pay for something with it and he tells me how much change I get back, he gets to keep it.”

Mohit: “So at 7 years old he’s quite rich because he can calculate his change?”

Javita: “If I give a $20 bill and its $13.27 he knows exactly how much change he’s going to get and he could keep it. He’s been doing this since he was 5. What he does with money, I have never seen anything before. Even the people are shocked. I took him to Family Dollar and gave them a $50 bill and he knew the exact change I would get back so he kept the change. They were shocked and they started clapping in line. He thinks he’s the math star.”

Mohit: “So for parents who might be thinking about this program, what would you tell them?”

Javita: “I would definitely tell them to give it a try. It is not a lot of money and it is worth it. We’re going to stay here until the end. Jaisen loves it and I like that it is competitive. There’s a boy in his class who is on the same book as him. He just started and Jaisen is like I have to hurry up with that book so that he won’t catch up with me. Then there’s a boy that is a book ahead of him and he wants to catch up to that boy. It is a little competition and it’s friendly.”

Mohit: “So someone coming from as far as you guys, you would recommend it to them?”

Javita: Yes, I would. I had him in Huntington for about 3 months just to help him with his reading comprehension, but what you were able to do vs. what they did, no. I didn’t see the growth in Huntington as I did at Math Genie.

Mohit: “We have a fantastic reading program. We do comprehension, writing, grammar, sight words, and phonics. How much did you pay at Huntington?”

Mohit: “Okay I understand. Thank you for letting me discuss Jaisen’s progress with you.”

Javita: “Thank you. You have been very helpful. Jaisen says he’s going to be an engineer.”

Mohit: “Wow, that’s good. It is good to know when you’re young what you want to be.”

Javita: “He said he can do anything in math, he’s so cocky. But, thank you.”

Check out other Success Stories: