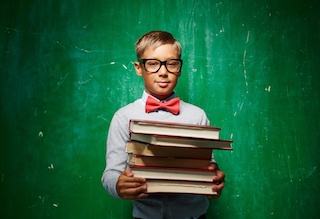 Most of us likely experienced the problem of lower-quality textbooks at some point during our education. You may have had to deal with textbooks that were out-of-date or damaged. They might not have had all the most recent information. Or maybe they were ripped up or written in by previous students. It could be inconvenient, to say the least.

Well, according to a recent story from Education Week, a new study shows some evidence that the math textbook a school chooses can have a large impact on the performance of its students. Researchers from California took a look at the four most popular math textbooks in the state. They found that one of the textbooks, Houghton Mifflin’s California Math, was consistently associated with higher math scores in grades three through five, compared to the other textbooks.

So what’s the takeaway from this? Well, it’s hard to say. The thing is that the study did not say what exactly it was about certain textbooks that led to better student performance. But it did show the textbooks have some sort of impact. So I’d say the main thing to take away here is that all students should have access to the best textbooks possible.

Replacing textbooks every few years may not be that much to ask for. I remember constantly using old textbooks when I was in school. These textbooks might not have been up to date with the most accurate information. I could especially see this being a problem with subjects like science and history, where researchers are constantly finding new information.

Bottom line, having the highest quality textbooks is extremely important when it comes to getting children to have the best education possible. In fact, this study even found that textbooks actually have a bigger impact than the level of experience the teachers have.